The Chicago White Sox have been batting for victory since 1901. Yet, their home since 1991 is and has long been the U.S. Cellular Field. This Major League Baseball team has experienced a lot of memorable games in this ballpark where some of the best players, like Mark Buehrle, A.J. Pierzynski, Paul Konerko, Carlton Fisk, and Scott Podsednik, among many others, have poured their heart and soul into achieving wins for the group.

Now that the ballpark is turning 25 years old, the White Sox will be playing there once more during their Homecoming Weekend. As part of the celebration, on May 21st, they will be giving out anniversary canvas giveaways to 20,000 fans in the stadium! 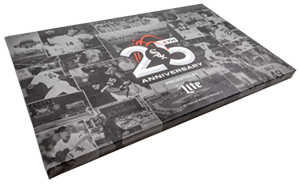 
We can help you make your anniversary giveaways take that extra leap. Browse through our blog now.